Martin Davies GW4GNY from WELSHPOOL, Powys wrote on February 29, 2020 at 7:42 pm:
Listening on my Yaesu FT2000 with a brand new Bushcomm folded dipole on 5025 here in Welshpool, Mid Wales. Great signal enjoying Hendrix, Al Stewart a Dutch tune about the radio and now Van Morrison. Will listen out in future….Forgot to say you are 55555 here, a great signal!

James R Renfrew from Clarendon NY USA (listening in Newfoundland-Canada) wrote on December 10, 2019 at 7:06 pm:
Jim Renfrew (Clarendon NY), Chuck Hutton (Seattle WA), Jean Burnell (Halifax, NS) and John Fisher (Kingston ON) conducted a DX Camp the week of NOV 4-11 2019 in Cappahayden, Newfoundland, Canada.
The announcement I heard was as follows: "please send all your reception reports to mikeradio@live.nl, mikeradio@live.nl". More music followed, then an announcement in what I would presume is Dutch, and the broadcast ended just after 1901 UTC on 1617 AM.
I would appreciate a confirmation!

John from Kingston, Ontario, Canada wrote on November 15, 2019 at 8:32 pm:
During a recent trip to Cappahayden-Renews, Newfoundland on Canada's east coast, I was able to log your station. There was a group of 4 listeners (Jean Burnell, Jim Renfrew, Chuck Hutton and myself). We had set up a number of antennas which were used when I heard your station. I have attached an audio clip so that you can hear the quality of reception from across the Atlantic. Reception details :
Date : November 9, 2019
Time : 1854 to 1916 UTC
Frequency : 1617 AM
Heard clear ID, just before closing down. (And the return for a short QSO).
Programming : rock music with occasional announcements by Mike in Dutch. I hope that this report is of interest and that you will be able to verify it with your QSL. Best Regards,
John Fisher, Kingston, Ontario.
Hier ontvangen
video Cappahayden Canada
Daglicht in Newfoundland Canada tijdens ontvangst Mike Radio op 1617 AM
Ad John; "We were still in daylight when I heard your station. In fact it was about 1 1/2 hours before local sunset, which is why it was so special to hear European stations on the medium wave band at such an early time". 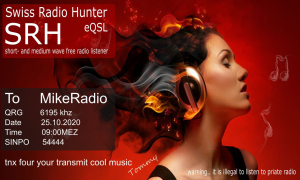